There is never any shortage of horrible creatures who prey on human beings, snatch away their food, or devour whole populations; but examples of wise social planning are not so [...]

There is never any shortage of horrible creatures who prey on human beings, snatch away their food, or devour whole populations; but examples of wise social planning are not so easy to find…” Utopia

There is never any shortage of horrible creatures who prey on human beings, snatch away their food, or devour whole populations; but examples of wise social planning are not so easy to find…” Utopia by Thomas More.

More certainly got the last bit right. The wisdom in social planning lies not only in solving a problem, but also preventing it in the first place. While a State’s criminal justice system can address its citizens’ grievances, the ideal is to create awareness about the problem, encourage community engagement, ensure that the society’s collective consciousness is geared towards being responsible for its most vulnerable group (children), and link multiple agencies and organisations for the system to work seamlessly.Among the various issues in child rights, the biggest concern is Child Sex Abuse (CSA). However, it is preventable, but does anyone know how?

Thanks to the efforts of NGOs like Tulir (Chennai), Enfold (Bengaluru), Arpan (Mumbai), and several others in India, awareness about CSA has increased, but social workers claim that it’s being perceived as somebody else’s problem.

“Whenever we conduct workshops, very few parents turn up. I’ve asked them why and they’ve said that their kids will never be sexually abused because they grow up in a protected environment,” rues Kushi Kushalappa, head, policy and community integration, ENFOLD. “When they’re ignorant about the scale of the problem, how will they equip the child?”

One of the first barriers towards disclosure of sex abuse is the lack of trust, communication and comprehension of the problem by adults.
That’s why Arpan’s workshops in schools begin with parents, teachers, and also the non-teaching staff even before they approach children.

“Arpan believes that healing and awareness have to go hand-in-hand,” explains Nehal Parekh, director of services and resource development, Arpan. “You have to empower the environment around the child. Parents, teachers and non-teaching staff need to know how to respond to a complaint or notice any sudden behavioural changes in a student.”

Children too need to be made aware about potential risk factors and ways to seek help. A Delhi-based NGO, Social Axiom Insignia, has attempted to do that. Under its flagship Project CACA (Children Against Child Abuse), it introduced interactive storybooks where law is discussed as a character in short stories and poems. POCSO (Protection of Children from Sexual Offences Act) is personified as a kid who talks about personal safety, safe and unsafe secrets, etc, with other kids of all ages. “As a pilot project, we have introduced this in 15 districts in Delhi, Haryana, Punjab, and Chandigarh,” says Vikas Nautiyal, advisor advocacy, Project CACA.

While there are many prevention strategies in India, there is one in the UK that addresses it differently. “Prevention cannot be only about catching offenders and teaching risk factors to a child. You cannot punish your way out of the problem,” says Donald Findlater, one of the foremost names in the prevention of CSA in the UK. With the help Lucy Faithfull Foundation, Donald has been running a helpline Stop it Now! in the UK since 2002, for potential abusers to seek help.

That’s right. People who have sexual feelings towards children can call Stop it Now! to seek help. “The helpline offers confidential advice and support to men troubled about their own sexual thoughts or behaviour, whether online or offline,” he explains.

Let’s be clear here: Donald is not advocating that abusers are harmless and hence need support. The assumption here is that such adults are cognizant of their harmful thoughts and actions. But they are lonely, and that can make them more dangerous. So, if there is an avenue for them to seek help, it’s a definite step towards prevention.

“Our helpline offers someone to talk to, and also reminds them about the harm their action causes. We give practical advice on staying safe and direct the caller to other support systems,” he adds.
Since the time of inception, Stop It Now! has received over 50,000 phone calls, and this has enabled even the law enforcement to approach it differently.

We point towards POCSO in India and the strong child protective laws in the UK. But Donald opines, “After you incarcerate them, then what? What are these prisoners to do when they’re out on parole or complete the prison sentence? How will they cope with their urges in the new-found freedom? The chances of them becoming repeat offenders are high. My helpline aims to prevent that.”
Possible in India, but not now

Will such a helpline work in India? “I wouldn’t dismiss the idea entirely, but we are jumping through hoops before addressing the fundamental problem of denial in our country,” says Vidya Reddy, founder of Tulir, Centre for the Prevention and Healing Child Sexual Abuse, Chennai.

“Parents don’t want to acknowledge CSA as an immediate threat to their kids. If the victim is a girl, it becomes a question of family honour, parenting, etc. If it’s a boy, they don’t take it seriously enough. How is a helpline for abusers going to work in a system that has is blind towards its victims?”
Vidya makes a compelling argument. The concept of prevention is ambiguous in India. NGOs work within their own set of parameters, and their work is insulated within the State or immediate neighbours. There’s no integrated framework that can influence public policy.

And she raises another valid point: “Paediatricians give guidance to parents on nutrition, vaccines, medication, threat of infections and illnesses, for their kids etc. Why can’t they also talk about personal safety? CSA is not just a social issue; it’s also a public health problem.”

A survey by World Vision India revealed that one in every two children is a victim of child sexual abuse. Out of a sample of 45,844 children within the 12-18 years across 26 states, one in every five children said they were scared of being sexually abused.

While most workshops are conducted for in primary school, Kushi Kushalappa of Enfold, an NGO, believes it must begin from pre-school. “In 2014, a van driver sexually abused a kid who was barely three. Does the child understand what happened?” 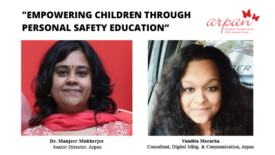